The name Timperley can be traced back in one spelling or another as far back as 1070. The spelling has changed a number of times from Timperleie through Tympurlegh and other variations to the name we know it as today. The name means a stone outcrop in a woodland clearing. Timperley is sited on on a solid sandstone and  years ago contained large stone quarries, all now disused. Large blocks of sandstone were known as "tymps" and there is still evidence of these stones today where they exist as  gate posts and garden walls. Just take a good look at the perimeter walls around Moss Park Gardens.

Park Road was not always known by this name. Up to 1927, Wash Lane, as it was then called, existed from Manchester Road as far as the railway and canal bridge. During the 1930s Wash Lane was extended as far as Timperley Village and was renamed Park Road. This extension allowed for the development of the new residential housing estate stretching from the Bridgewater Canal to Heyes Lane.

Moss Park Community Gardens is a small piece of land at the corner of Park Road and Moss Lane in Timperley, owned by Trafford Council, and now looked after and improved by the Friends of Moss Park Gardens.   This part of Timperley was originally poorly drained, open moss land but by the 18th century it was enclosed and put to agricultural use.   Some time after that a farmhouse was built on what is now Moss Park Gardens.  The farmhouse was later divided into two cottages which survived until 1941.

The earliest reference to the site is the sale in June 1765 of a “parcel of moss ground in Timperley” by William Twyford to William Coumbs.   William Coumbs then sold the land to Mary Peers in December 1778 and it appears to have remained in the ownership of the Peers family for several generations.  The site was described in the Cheshire tithe maps of the 1830s as a “Farm house, orchard and field”, covering 1 acre, 0 roods, 8 perches, and was rented out to William Lamb.

The land and farmhouse passed down through the Peers family.  In September 1848 Thomas Peers of Liverpool sold the property to John Skelton of Pickering Lodge, a large house on Moss Lane, Timperley, now the site of Pickering Park.  John Skelton sold some of his other land to the Stockport, Timperley and Altrincham Railway Company in the 1860s to build a link line between Stockport and Warrington, and his name is preserved in Skelton Junction.  John Skelton owned the site of Moss Park Gardens until his death in 1886, and he continued to rent out the farmhouse during this time.

After William Lamb’s tenancy ended, the house appears to have been divided into two cottages and in 1861 they were occupied by Robert Dixon, a coachman, his wife Elizabeth and five children, and next door by his mother-in-law Ann Goddard and his mother Margaret Dixon.

The Ordnance Survey map of 1876 shows the two cottages and gardens.  In addition there is a small building adjacent to Moss Lane in front of the cottages, which may have been an agricultural building of some kind such as a barn or stable.   This building was subsequently demolished, before the cottages themselves.

At this date Timperley was still a largely rural community.  Along Park Road (then called Wash Lane) there were just a few Victorian villas and cottages, and a large farmhouse named Riddings Hall.   Moss Lane was bordered by fields up to the railway bridge, where there were railway houses, still in existence, and farmhouses and cottages on the site of the present Moss Trooper public house.  The cottages on the corner of Moss Lane and Park Road would have been a landmark and so it is unfortunate that no photographs of the cottages have been discovered as yet.

In 1881 one cottage was rented by Thomas Britland, an agricultural labourer, his wife Sarah and their daughter.  The other cottage was occupied by John Davies, a domestic coachman, his wife Mary and their five children.

John Skelton, the owner of the land and cottages, died in 1886 and having no children, left all his land in Timperley to his nephew Robert Dennison Clarke.  Robert Clarke died in 1889 and left the property to his sister Elinor Clarke.  She inherited “a freehold plot of land containing 2 acres 1 rood 26 perches, and the 2 cottages thereon the whole let to Mr Keymer at an annual rent of £45”.  Mr Keymer was a Manchester merchant and farmer, who lived at a house named Moatfield, opposite the junction with Moss Lane.  Moatfield was later demolished and several pairs of semi-detached houses built on the site.  In October 1893 Elinor Clarke sold the land and cottages to Sidney Keymer, who continued to let them out the until 1919.

In the 1891 census, one cottage is shown as occupied by John Maskell, a coachman/domestic servant, his wife Annie and four children.    The other cottage remained occupied by Thomas Britland, his wife Sarah, daughter Hannah, son-in-law Fred Maxwell, a groom, and grandson Walter.

In 1901 the first cottage was occupied by Samuel Sherlock from Ashton-on-Mersey, a railway porter, and his wife Nellie.  The Britlands still occupied the second cottage.  Around 1903 Fred Maxwell became the occupier of the second cottage, his father-in-law Thomas Britland presumably having died.

By about 1911 the cottages were known as Ivy Cottages and were described as “brick built and slated, in fair condition”.  One was made up of two rooms up and two down and a pantry, and was rented by Joseph Howarth, an upholsterer, his wife Sarah and five children.  The other cottage was two up and three down, and was rented out to Fred and Hannah Maxwell and their three children.  Fred was a coachman, his son Walter was a railway porter, and his daughter Nellie a shop assistant.  Hannah’s mother Sarah Britland, now a widow of 85, also lived with them. Each cottage had a garden and earth closet.  The cottages were freehold and the occupants paid an annual rent of £13 each.  Rates, taxes, insurance and repairs were paid by the owner, Mr Keymer.

Around 1916 Joseph Howarth was replaced in the first cottage by a new tenant, Herbert Hardy, an inspector, and the Hardys and the Maxwells remained the tenants until shortly before the start of the 2nd World War. On 16 December 1919 the land owned by Sidney Keymer, from Moss Park Gardens up to the railway bridge on Moss Lane, was sold at auction in Manchester for £850 to Arthur Edge of Westwood Avenue, Timperley.   Arthur Edge ran a mineral water business which had been started by his father Thomas Edge in Longsight, Manchester in 1885.  Arthur Edge’s great-grandson Tony Edge has set up a website describing the history of the company.

In the auction details the Moss Park Gardens plot was described as a “Freehold plot of land 2 acres 1 rood 26 perches......together with the Two Cottages erected thereon.  The cottages and land are let at annual rents of £32”.  The rent was made up of £6 a year for the land, and 5 shillings a week for each cottage.

Arthur Edge sold most of his land in the 1920s but retained the area which is now Moss Park Gardens.  He also built a timber garage on the site.

There was a final change of tenant in 1938 when Thomas and Elizabeth Williams were recorded on the electoral register at 1 Ivy Cottages, and Fred and Hannah Maxwell at 2 Ivy Cottages.  The Williams’s and the Maxwells were probably the last set of tenants of Ivy Cottages.

Arthur Edge sold the land and cottages, covering 1035 square yards, to Altrincham Borough Council on 6 August 1940, for £260.  Trafford Council’s property records state that the land was “Originally purchased for road improvement.  Appropriated to Services Committee on 3.9.1974 for Public Open Space.  Area appropriated 940 sq.yds...Remainder 95 sq.yds. is part of the roadway.”  This suggests that part of the land may have been used to widen the road, and photograph of the corner of Moss Lane and Park Road at Trafford Local Studies Centre probably taken in the 1930s does show the boundary wall further forward than its present location.

Mr Ron Clayton of Timperley remembers the cottages when he was a boy during the 2nd World War, when the cottages were empty.  His impression was of a derelict farmhouse, of a yellowish colour, possibly rendered and painted.  The building was situated diagonally on the plot, in line with the present path through Moss Park Gardens.  The building was used for fire practice by the ARP at the start of the war.  They would set fires and then practice putting them out with hosepipes.

The cottages were demolished on 11 September 1941 after which the land became the public space it remains today.  Public conveniences were built, and later demolished.   A portion of land was leased to the North Western Electricity Board who built an electricity sub-station which still stands.   The canopy on the front of the sub-station was removed in 2011 and Moss Park Community Gardens now provide an attractive green space at a busy road junction. 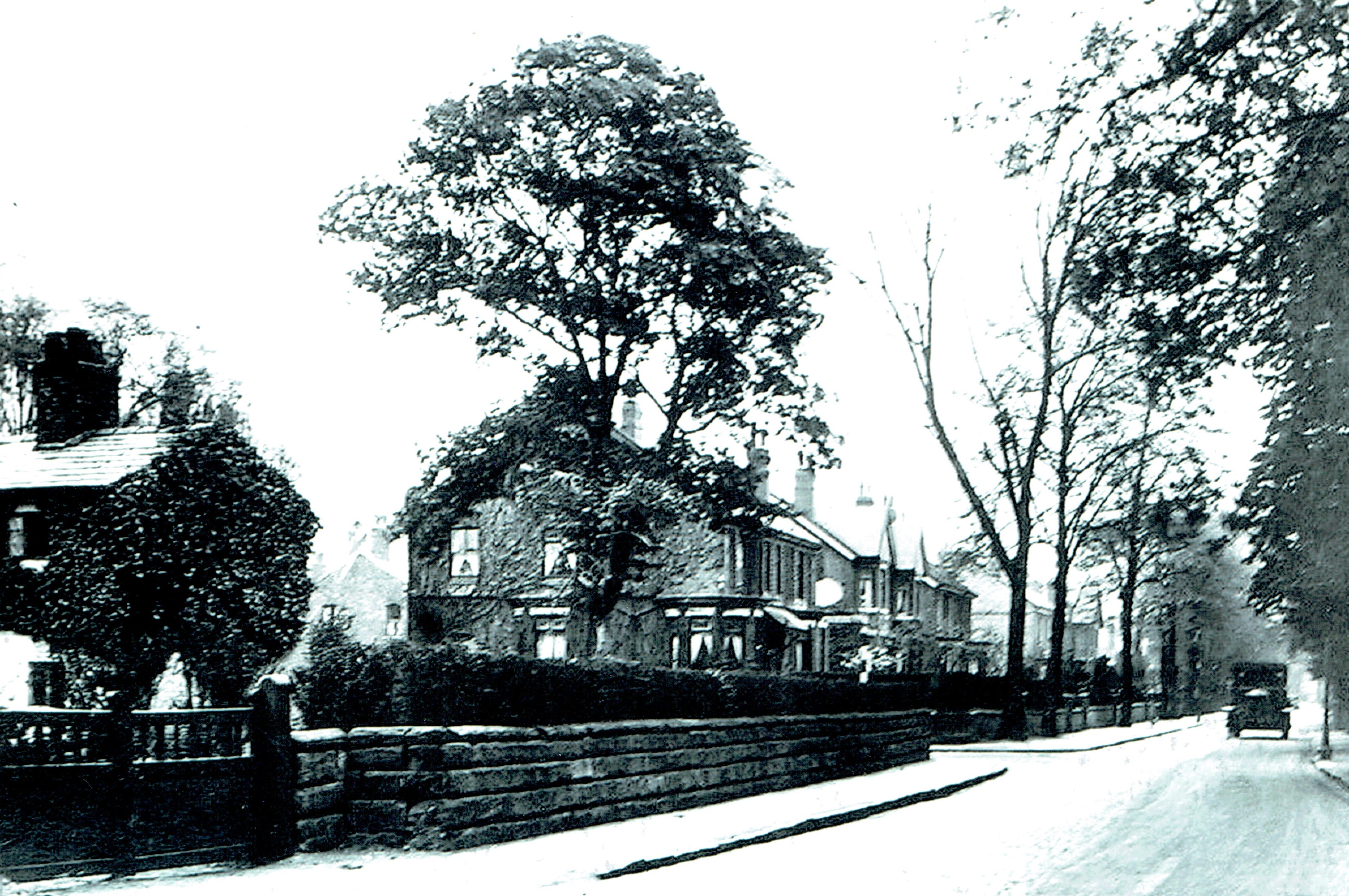 Dr James Percival of Oxford has been in touch to say that his grandfather lodged at one of the Ivy Cottages in the 1930s before his marriage.  Here is an edited version of his story:

My grandfather William Hughes left grammar school in Shropshire, lodged with my grandmother’s family in Carmarthen while working for the Great Western Railway, and was clearly looking for a better paid job. The railway line from Altrincham to Manchester was electrified in 1931 and he almost certainly started work as a ticket clerk, either from the start of the new line, or very soon after.  This would have been the point when he moved to Timperley and lodged in Ivy Cottages. My grandparents then got married in Carmarthen in 1932 and moved to 9 Arderne Road, Timperley at some point, and certainly by October 1934 because it is recorded on my mother’s birth certificate.

My grandparents’ story seemed such a crystallisation of the 1930s: new industries and suburbs reflecting the growing areas of manufacturing and quite profound social change taking place throughout England and the UK.  It was the electrification of the Altrincham to Manchester line in May 1931 that brought my grandparents to Timperley; and it was the line that fuelled the growth of the suburbs and the industry in Altrincham and Broadheath.

Timperley was to be my granddad’s home for the rest of his life. He retired from the railways when he reached 60 in 1968. Altrincham is unquestionably my ‘home town’ and I have very fond and powerful memories of it as a boy.

Many thanks to James for sharing his family history with us. 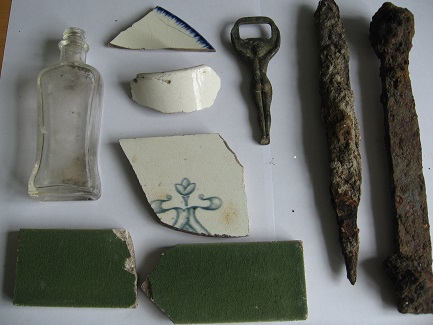 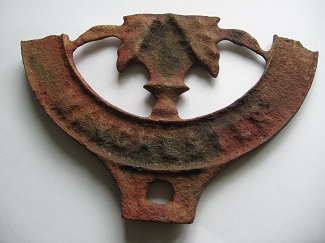 With grateful thanks to Ron Clayton, Tony Edge, Colin Hill, Hazel Pryor and James Percival for their help in compiling this history.